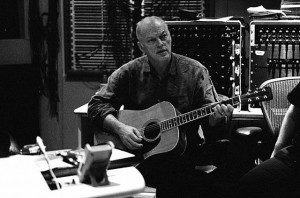 Singer Graham Nash has confirmed that David Gilmour is recording a new album at his home in Brighton, England.

Crosby and Nash sang on David Gilmour’s last project On An Island and are lending their vocal expertise to David Gilmour’s new album. And it seems they are working for free!

In an interview with Vintage.tv (around 12min 50sec), Graham Nash said, “I’m leaving here and taking the train to Brighton to go and sing with David Gilmour on his new record. No ones… we’re not charging anybody. What the hell would it cost you to have David Crosby and Graham Nash getting on a bloody train to Brighton to sing with you? We are musicians? We love good songs. We will sing them until we are dead.”

There have been lots of rumours brewing for a while now about a new album from David including his guitar tech saying David is happy with his new Helios guitar effects pedal.

Phil Taylor said, “I think the Helios is really good – I had Andy Jackson down for tests in the studio yesterday and he thought the same. Can I please get another one asap – this week if poss or beginning of next week. I want to replace the ***** pedal in the control room set up with it before David starts recording.”

David Gilmour’s last studio album, On An Island, was accompanied by an extensive tour which was enjoyed by many fans around the world. Wouldn’t it be great if David Gilmour was to tour again in 2014 with his new album?