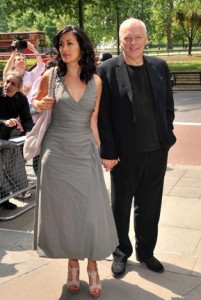 David Gilmour has performed a new original song at his wife’s 50th birthday party which took place on Friday 27th April 2012. It was at the 20th Century Theatre in Westbourne Grove.

David had told Polly apparently that there was to be a karaoke band performing on the evening for their entertainment. However, David got up and did some songs with Guy Pratt and Phil Manzanera. Polly Samson publically shared a photo on Instagram from the performance.

The performance of a new original song is not evidence of a new album or tour in future. It is simply a new song. But it does offer some hope that there could be a new album and tour at some point in the future. Although it is denied by David’s manager.