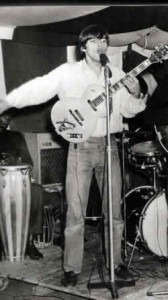 Before David Gilmour joined Pink Floyd, he was in a band called Jokers Wild and they released a self-titled and very limited edition album of cover songs on an EP. They played a good few concerts around Cambridge, England and even went so far as to venture down into the big smoke of London to perform at Byam Shaw School of Art, Campden Hill, Notting Hill Gate, London. They were on the same bill incidentally as Syd Barrett’s Pink Floyd.

I wrote an article for Neptune Pink Floyd about Before They Were Floyd which you may wish to consult.

Anyway, the EP is not available to buy as it is out of print and has been for circa 50 years! It is on Youtube though and this is one of the covers recorded below in an era where the Beatles and the like were dominating the airwaves! Considering they were not on a big budget, the recordings are surprisingly good for a small band from Cambridge. Certainly sounds better than my old band’s studio demo recordings! David Gilmour was performing backing vocals I believe.

David Gilmour with Jokers Wild – Why Do Fools Fall in Love