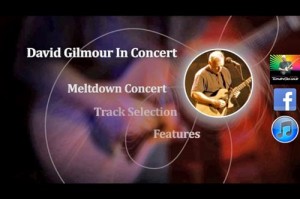 Not wanting to be left out of the whole mobility revolution of smartphones and tablet PCs, David Gilmour’s Meltdown concert DVD from 2001/2002 has been re-worked from the original DVD into an Application (App).

It will be released on November 19, 2012 and will be available for iPhone, iPad, and iPod Touch. There will also be another version released later for Android phones. Get our Free Newsletter to find out when. It sells for £5:99, $8.99, €6.99 or equivalent.

The app is created by DVD Authoring outfit The Pavement who have created a new technique for transferring DVDs to mobile device friendly formats. With more and more people engaging with entertainment content via mobility devices like phones and tablets, it is an exciting medium and David Gilmour’s Meltdown concert is the first in the world to get this treatment. So there!

Here is a video…