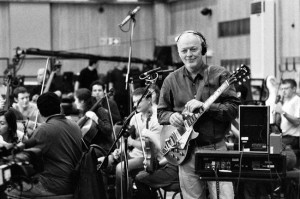 Welcome to the latest sister website of Neptune Pink Floyd dedicated to the tours and solo albums of David Gilmour. This site will feature all the news and tour coverage should David Gilmour decide to start recording and touring in the future. It will, over time, also feature a retrospective look at all things David Gilmour concerning solo tours, albums and other such things.

Although it has been denied by his manager, David Gilmour is said to be reviewing songs he has made demos of from his On An Island project. In an interview back in 2008 with Mark Blake from MOJO magazine, when asked about what are the chances of another David Gilmour album, David Gilmour said, “I undoubtedly will make another record. I’m not ready to retire. There’s tons of stuff left over from On An Island. I just write and jot down ideas and one of these days I’ll sit down again and have a listen.”

Additionally, in a recent interview,David Gilmour’s wife Polly Samson said that she had been writing lyrics for David. She wrote lyrics on Pink Floyd’s Division Bell album and also David’s solo album On An Island which was toured extensively in 2006. Your humble narrator here went to see the show at Manchester’s Bridgewater Hall and was most excellent!

Considering that recording has not commenced on any new David Gilmour album, it is not incomprehensible to believe that there is no David Gilmour tour booked either. If David does decide to take some songs from his treasure trove of demo recordings and put a new album together, I would not see a reason for him not to tour it. Indeed, this website is set up in the hope that he will tour again! However, in the meantime, I shall focus some attention to the solo works of David Gilmour, his equipment, strings, settings, guitars and that nice Black Strat of his!

The best way to get news updates about a possible David Gilmour tour or David Gilmour new album, is to follow the Neptune Pink Floyd  Facebook and Twitter accounts. You can also get out email Newsletter for all the latest. Only takes a minute to register for all three.

So, there you have it. The first post from David Gilmour Tours.