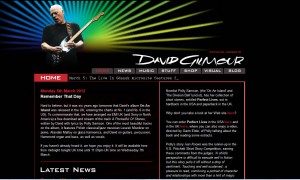 To celebrate the 66th birthday of Pink Floyd guitarist David Gilmour tomorrow on 6th March, the Official David Gilmour website will be offering for 48 hours a free download of A Pocketful Of Stones. It was written by David Gilmour with lyrics by his wife Polly Samson. That will appear on his official website at 12am GMT 6th March 2012 for your official downloading pleasure!

The song is of course taken from his last and third solo album On An Island which was toured around several countries to much applause. Most notably, he performed to a massive audience in the Gdansk Shipyard in Poland which was recorded and released as a live concert on DVD. If you have not seen the DVD, then you should get yourself a copy (see Amazon UK and USA) as it is excellent. His rendition of What’s… Uh The Deal is possibly the best version I have heard. Wonderful.

Look at many David Gilmour photos.

The best way to get news updates about a possible David Gilmour tour or David Gilmour new album, is to follow the Neptune Pink Floyd  Facebook and Twitter accounts. You can also get out email Newsletter for all the latest. Only takes a minute to register for all three.

So, there you have it. The news from David Gilmour Tours.